I returned last week from India and I believe jet lag is over!  Didn’t do anything to special to conquer it, just came home to sub zero temperatures and snow.  Maybe the cold and the driveway I had to clear were what I needed to kick start the body on KS time.  Regardless, it’s great to be home and back in KS even if its frigid here.

I am in the middle of uploading photos to Flickr and some of our latest project dedication photos can be found at this link; http://www.flickr.com/photos/wellsforlife/sets

One of the projects we dedicated was funded in part by the students of ORU and their chapel offerings.  The photo set from that dedication can be found in the Flickr link above; here is a glimpse of the school kids which are benefiting now from clean water thanks in large part to all the students who gave.

Another highlight for me was watching one of our projects being drilled.  Generally this entire process is complete by the time I make it to India but in this case the drill was drilling and I got to watch!  I uploaded some photos of the drilling and you can see those on our Flickr page under the set titled “Drilling a well”.  Several days later I returned and dedicated the project which was cool; start to finish in just 3 days.

This is my 13th year being involved in India and I’m grateful for the opportunities and the lessons that I have learned over the years.  Each trip I take reveals new opportunities and my hope is that you will join me in making an impact in the lives of India’s masses who are struggling because among other things they lack access to clean water.

When you give to Wells for Life, know that the gift is being used to change a life, a life like one of those precious school kids pictured above. 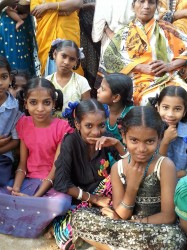 Amazingly my trip is almost over and I haven’t posted on this blog, thankfully though I have kept photos and some snippets of the trip coming through Twitter, Facebook and Instagram.

If you haven’t been following me there, then I encourage you to do so because quite often this is the best way for me to post how the trip is going and to show you via pictures the impact we’re making with clean water and some of our other initiatives were involved in.

We dedicated 4 water projects in the East Godavari District of Andhra Pradesh, supporting and strengthening the efforts of our partners, NASA and SHEBA. Dr. Premdas is the Director and Founder of both organizations though the day to day operations for both are now in the hands of others. SHEBA is run by his daughter Neelima and son in law, Raja and it is through them that we are working in outreach to lepers, HIV/Aids people, vulnerable and at risk children along with community care centers and finally New Life Children’s Home which has 200 incredibly beautiful kids.

Our 5th water project we hoped to dedicate yesterday was still being drilled so we went by the site and spend a short time watching the incredible engineering feat of a drill at work going down in the ground and bringing up water. Amazingly enough this is only the 3rd time in 13 years that I have actually been present for the drilling of a project and I have to say, it’s pretty fun to watch!

For some villagers striking water is more exciting than hitting oil, though for us Westerners who take water for granted each day, an oil strike seems much more lucrative. In rural India it’s all about survival; living today free from bacterial illness which might be attributed to their current water source.

As foreigners, we have a lot to learn about life, its value and what really is important.

Today is Sunday and we have a lot of activities planned around the campus of New Life. Top floor dedication, a church service with the kids to attend, meeting and feeding of lepers and those suffering from HIV/Aids and maybe even squeeze in some volleyball with the 9th and 10th grade boys. Tonight there will be a cultural program put on by the children which I am sure will be nice and then the plan is to wake up early, grab some coffee and watch the Super Bowl via some Indian channel or stream it on the computer or my phone. At this point I’m not expecting a super-fast connection so it could be a less than ideal viewing experience, but we’ll see.

Monday I hope to see the village which the bore well was being drilled in yesterday and it could be that a dedication can still take place before I head to the airport in the afternoon. I’ll be in Trichy later in the day and Tuesday I have 6 projects to dedicate.

Tuesday night I head back to the airport for a flight back to Chennai. Grab a few hours of sleep at the Radisson then the long trip home. I hear there is snow and not really looking forward to leaving my wonderful India and her warm temperatures but I can’t stay longer or my family would cause a revolt.

I’ll be back in March and pick up where I have left off so until then, villages are waiting…. for their project, for their water. Help me end their waiting; $2,000 can do just that.