The latest and greatest

The challenge for me is to always in-capsulize my trip in a short enough version to where folks will read it, after all a ton of stuff got done and this for some reason was one of my more memorable trips. Tough to narrow down the highlights but one was I traveled with a friend from N. California and he didn’t snore! Can’t tell you how huge that is and you would think ear plugs could drown out any noise but they don’t cause I’ve tried so anytime that I travel and if I happen to share a room then snoring can’t be in the mix and if it is, well then I’m miserable the next day.

Aside from this, highlights were 11 project dedications; 7 in the hill tribe region of Southern Gujarat and 4 in 2 southern districts of Andhra Pradesh.  In addition to the water project dedications and seeing again huge impact due to clean water there were 2 other things that affected me.  The first was while Dave and I were in Gujarat after dedicating water projects we visited in Valsad a girl’s hostel being run by our partner there, ASK Trust.  This home had 18 young women and a house parent, the girls are considered college age which in India means they are studying in the 10 – 12 class and provided they do well in school and get high marks on their exams will have the opportunity to further their education into what we would consider the traditional college route post High School.

Most of these girls are either orphan or semi orphan though a few do have parents but because of poverty they have been told to leave as they can’t be looked after.  This was my second visit to the hostel and like my first time back in November, I was gripped with the reality that if it wasn’t for this home then their lives would be in a much different place and it wouldn’t be good. By the end of the evening I was wondering what it would take to keep the doors open, lights on and the girls safe.  The reality is the work is being funded through the savings and meager incomes of one or two people and as a result the account is just about dry.

I have been around India enough, 15 years now since my first trip, to know that an appeal will come and one of course did come but even before it came I knew in my heart these girls needed my help and so I made the commitment and I did it in faith that God would provide.  The monthly cost to run the hostel is $1,000 and so my promise is we would fund at 6 month intervals and do a review annually to determine if the support would continue.

I have been home less than 2 weeks now and just a few days ago I touched base via phone with a guy I know from So. Cal who works as a IT Consultant and in a nutshell he said he got a bonus check and couldn’t get me out of his mind so he figured that was God.  I shared different needs with him and he signed up for 2 different projects with 1 of them being 5 months of support for Lydia’s home girls.  I can’t wait to see how the remaining funds materialize and how this need will be met.

I’ll end with a photo of the girls and honestly they look much nicer when they have huge smiles, something about a group photo which translates into serious faces.  If I would have been there taking the picture you can be sure I would have done something so goofy that they would be laughing and not standing so straight.  At least though you get a look at who were working for.

Oh yes, I did say something earlier about 2 things being impactful, I’ll share the 2nd later, I promise. 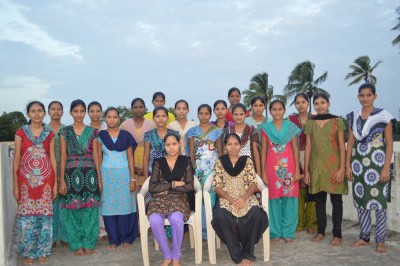